Suva, Fiji: The Swire Shipping Fijian Drua has today put out a rallying call to fans for support in their first ever Super Rugby Pacific match against the Waratahs at CommBank Stadium in Parramatta, Western Sydney on Friday 18 February 2022. CEO Brian Thorburn says although this is an ‘away match’ for them, both the Drua and the Waratahs recognise the historic nature of the game.

“It will be an honour for the first ever Swire Shipping Fijian Drua matchday 23 players to run out on to the field on 18 February at CommBank Stadium in Parramatta, proudly representing Fiji and Fijians everywhere. The 25-year dream and this incredible journey we’ve been waiting for will finally become a reality and it will be a moment to remember for years to come."

We’re calling on Fijian fans and rugby supporters to come out in numbers, paint CommBank Stadium blue and fill it with the sounds of Fiji. Let’s show the rugby world what it means for Fiji to have its own team in Super Rugby.”

Tickets for the 18 February match will be available on ticketek.com.au in early February. Fans who sign up on the Drua’s official website — drua.rugby — to receive Club updates will receive an alert as soon as tickets are available for sale.

The Drua have also confirmed a change in plans for hosting the Waratahs in Fiji for their Round 7 match on 1 April due to the ‘no-spectator’ rule introduced by authorities as a result of the Omicron situation in Fiji. This match will be played at another venue in Australia, as the Drua now aim to host the Highlanders in Round 11 at ANZ Stadium in Suva on 30 April instead.

“We would have loved to bring a match to Fiji earlier, but totally respect and support the decision of Fijian authorities. Public health considerations are paramount and the Drua’s thoughts and prayers are with our fellow Fijians as they battle this Omicron wave. We now aim to play the Highlanders in Suva on 30 April but will have to change plans again if the ‘no-spectator’ rule remains in place. We’ll need a full stadium to be able to host a financially viable match in Fiji and will be guided by the authorities in these considerations.”

Meanwhile the Drua have announced that the blockbuster Round 13 match against fellow debutants and Pacific vuvale Moana Pasifika will also be played at CommBank Stadium in Parramatta on 14 May.

“This will undoubtedly be a match for the ages as the Drua and Moana go head to head. Friendships and kava will flow after the match, but it will be fierce action on the field with high energy and high impact rugby that Pacific Islanders are renowned for. The boys are chomping at the bit for this particular match which will serve a treat for Fijian, Samoan, Tongan and other Pacific fans alike!”

Thorburn adds that several venues and cities in Australia have shown interest in having the Drua over for their remaining home matches.

“Placing our matches as closely as possible to where Fijian fans live in Western Sydney and South-East Queensland is really important to us. We are carefully considering all opportunities for venues in those areas and will share the final selections with all fans as soon as possible.”

“For now, we request our local area supporters to come out in numbers to catch their Drua live in action wherever we play. Our amazing fans and the Fijian people remain at the heart of everything we do. It’s their support in the stadium as well as prayers and well wishes from home that our team will ride on every single time we take the field.” 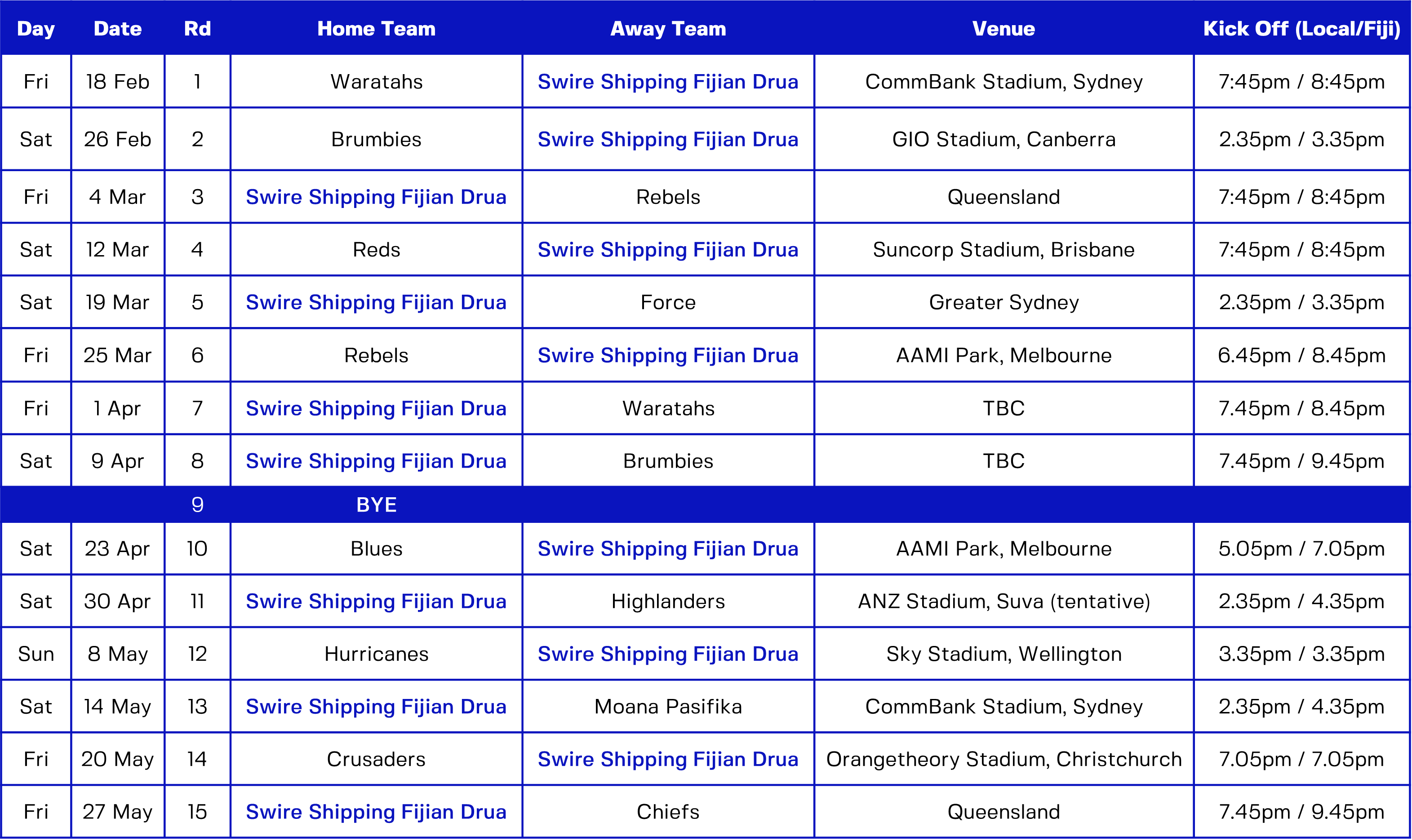