The Swire Shipping Fijian Drua has released details for five of their seven home matches for the teams’ debut Super Rugby Pacific season.

Brisbane’s Suncorp Stadium to be Drua’s first ever home venue in Round 3 against Rebels and will also be Round 8 venue against Brumbies.

Suva will be the place to be as Drua host the Highlanders in Round 11 on 30 April in front of their Fiji-based fans at ANZ Stadium.

Blockbuster against Moana Pasifika at CommBank Stadium, Parramatta locked in for 14 May.

Brisbane’s Suncorp Stadium will be the Drua’s home match venue for two games, with a game each confirmed for Sydney’s CommBank Stadium and Leichhardt Oval. The Drua will also play in front of their home fans at Suva’s ANZ Stadium on 30 April. Tickets for Suncorp Stadium match against Melbourne Rebels on 4 March and Leichhardt Oval match against Western Force will be on sale from Friday afternoon (11 February) on www.ticketek.com.au.

We are delighted to be able to announce five of seven home match venues today for all our fans, supporters and stakeholders. We are very happy to secure some outstanding venues like Brisbane’s Suncorp Stadium as well as CommBank Stadium and Leichhardt Oval in Sydney.

He continued: "We have growing confidence that we’ll be able to play in front of our home fans in Fiji at Suva’s ANZ Stadium on 30 April and are buoyed by the announcement by the Fijian Government about the return of spectators to sports.”

“Fijian rugby fans are renowned for the vibrancy, noise and atmosphere they bring to stadiums. Our players are absolutely buzzing at the prospect of Drua fans, supporters and rugby lovers cheering for them at the stadium by bringing the sounds and colours of Fiji to these venues.”

The Swire Shipping Fijian Drua host their first ever home game at Suncorp Stadium (Brisbane) on 4 March in Round 3 against the Melbourne Rebels at 6.45pm (AEST). Their next home match on 19 March will be a Saturday afternoon game at Sydney’s Leichhardt Oval in Round 5 against the Western Force. The Drua return to Suncorp Stadium for their Round 8 home match against the Brumbies on 9 April, with the match starting at 7.45pm (AEST). ANZ Stadium in Suva is next up as a home venue on 30 April against the Highlanders kicking off at 4.35pm. The Round 13 blockbuster against the Moana Pasifika remains locked in for CommBank Stadium on 14 May.

Thorburn continued: “The stage is now set for us to offer a unique Fijian-style fan experience at our home match venues to reflect the excitement happening on the field of play. We plan to deliver events to an extremely high quality to delight the entire crowd, by infusing a Fijian flavour and other exclusive touches to these events wherever possible. We’ll reveal details of these in the lead-up to each of our home matches.”

The CEO added: “Tickets and hospitality packages for our first two home matches will be on sale from the afternoon of Friday 11 February. We encourage fans to get in early to organise their friends and family, their kalavata, Fiji flags, blue wigs, lali, dholak and drums to cheer on their Drua!” 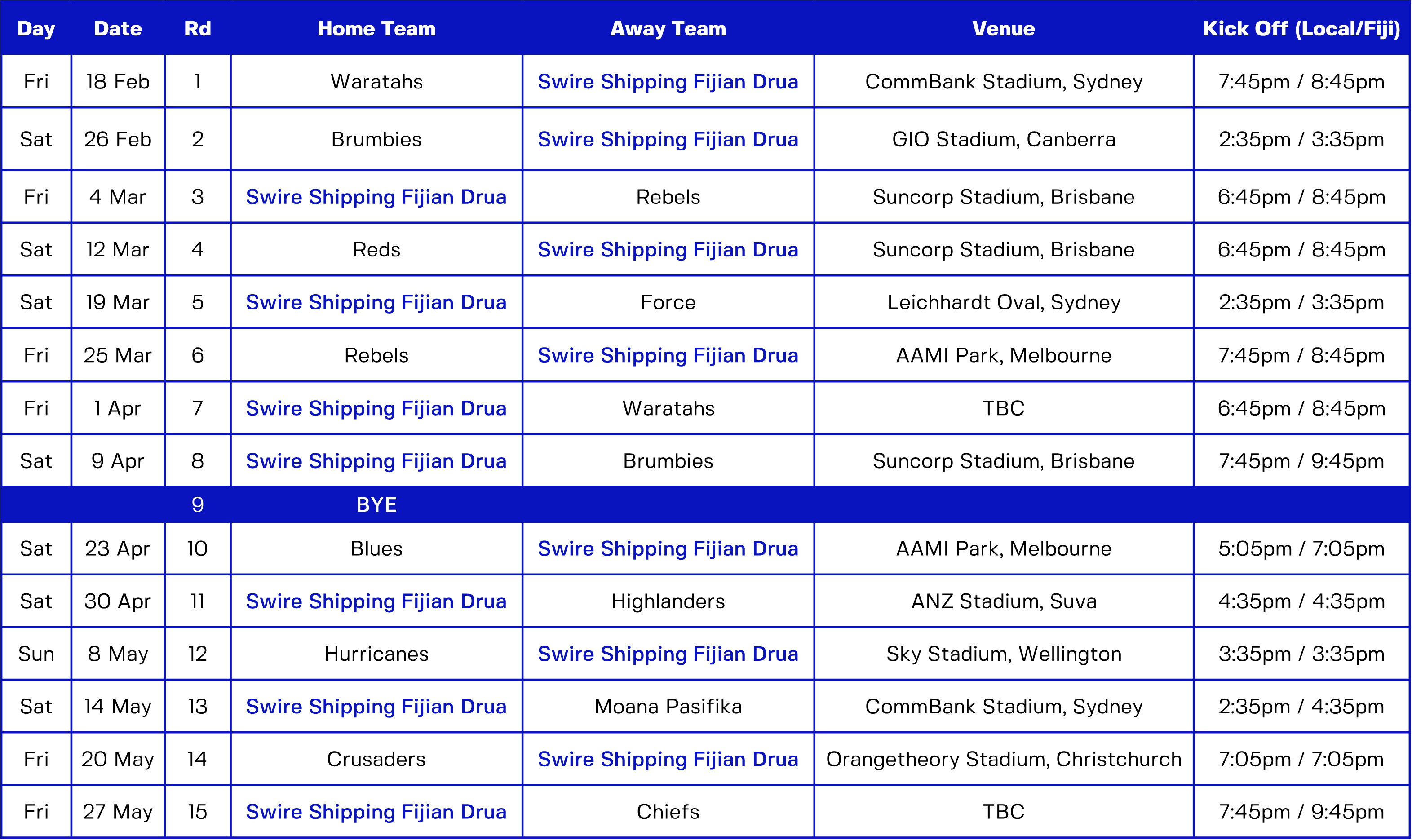